Racist graffiti in front of Japanese American home, Seattle, May 11, 1945 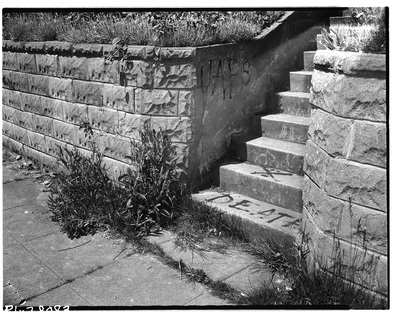 On December 18, 1944, the United States government announced that Japanese Americans in incarceration camps could return to their homes after January 1, 1945. In Seattle, and elsewhere on the West Coast, this was a controversial issue. When the first returnees arrived in Seattle in January, some found a cold welcome and vandalized property. Groups like the Remember the Pearl Harbor League and the Japanese Exclusion League, both formed during the war, actively opposed Japanese Americans returning to the region. Other organizations, like the Seattle Civic Unity Committee, the American Friends Service Committee, and the Seattle Council of Churches worked to reduce racial tension and ensure resettlement.

This image shows anti-Japanese graffiti in front of the home of Chiseko and Shigeo Nagaishi on the day they returned from incarceration at the Minidoka War Relocation Center to their home at 1610 Walker Street on Beacon Hill. The word "Death" was written in red paint on the concrete steps at the entrance to their home. Other graffiti, reading "No Japs Wanted," was painted on their garage door. They told the Seattle Post-Intelligencer reporter that they would have to find another home, unwelcome in their old neighborhood. Yet they persisted and resisted, and Chiseko stayed in the house until her passing in 2007.