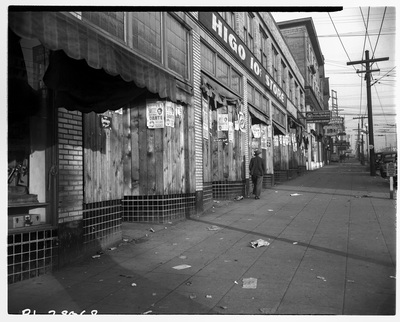 The exclusion of Seattle's Japanese families by the federal government during World War II changed the city in numerous ways. Among the more obvious signs were the shuttered and boarded up Japanese businesses along Main, Jackson and upper King Streets. Many of the families who managed or worked in the stores and shops never returned to the city after they left the incarceration camps.

This photo, taken in early June 1942, shows an area of Jackson Street in Seattle. Wooden planks cover the windows of Higo's Ten Cent Store. The Seattle Post-Intelligencer reported that about a fifth of the stores in the area were for rent. Many other Japanese businesses were taken over by people of other ethnic backgrounds.