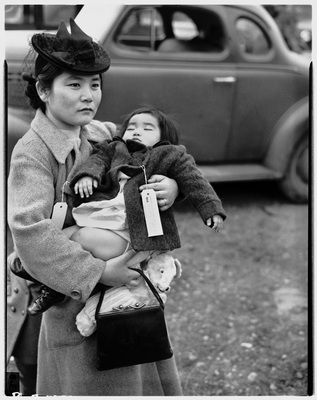 In this image, Fumiko Hayashida (1911-2014), holds her sleeping 14-month-old daughter, Natalie, at an assembly point near the ferry dock on Bainbridge Island. Civilian Exclusion Order No. 1 was issued at Bainbridge Island, ordering 227 residents of Japanese descent to leave with six days' notice. They departed by ferry on March 30, 1942. Hayashida and her family were incarcerated for a year at Manzanar before being moved to the Minidoka concentration camp in Idaho to be closer to relatives and friends. Manzanar and Minidoka were two of ten large camps operated by the War Relocation Authority in which Japanese Americans were incarcerated during WWII. In 2006, Hayashida testified in favor of a proposed memorial for Japanese American incarcerees on Bainbridge Island before a U.S. congressional committee. The Bainbridge Island Japanese American Exclusion Memorial was opened in 2011.