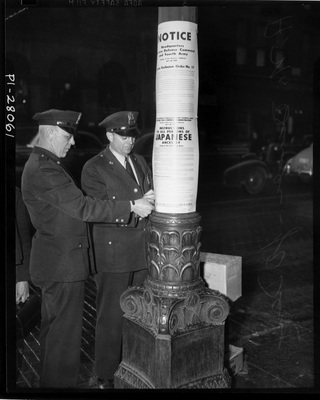 In this image two Seattle Police officers, J. O. Deng and A. N. Barger post copies of Civilian Exclusion Order No. 17. Exclusion Order notices were posted on buildings, billboards, telephone poles, and other high visibility spots within the exclusion area. The notice announced the exclusion of Japanese Americans and gave them one week to prepare. A member of each family was to register immediately at the designated "civil control station" of the area. Those that failed to comply by remaining in the area after the appointed time would be subject to criminal penalties.

On February 19, 1942, shortly after Japan's attack on Pearl Harbor and United States entry into WWII, President Franklin Roosevelt signed Executive Order 9066, calling for the exclusion of all civilians of Japanese descent from "designated military areas." More than 9,000 Japanese and Japanese American people living in the Pacific Northwest were forced into incarceration camps in Idaho and California until 1945.