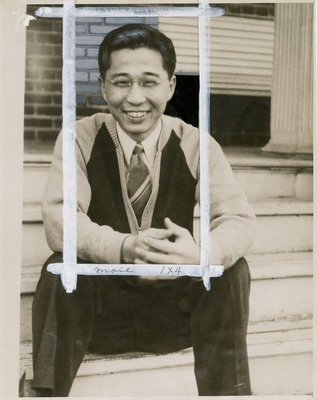 George Hirabayashi (1918-2012) was a sociologist and religious pacifist best known for his principled resistance to the incarceration of Japanese Americans during World War II, and the Supreme Court case that resulted from his conviction for defying curfew, Hirabayashi v. United States.

George Hirabayashi was born in Seattle, attended high school in Auburn, and then the University of Washington. In 1942, he decided to resist the incarceration order and turned himself in to the FBI. He was convicted of curfew violation, and appealed to the Supreme Court, which upheld his conviction; he served 90 days in prison in Arizona. He later spent a year at McNeil Island Penitentiary for refusing induction into the armed forces, claiming that a questionnaire sent to Japanese Americans demanding renunciation of allegiance to the emperor of Japan was racially discriminatory. Hirabayashi's criminal conviction was overturned in 1987. He received the Presidential Medal of Freedom posthumously, in 2012.

This photo shows a 24-year-old George Hirabayashi, and was run with an announcement in the Seattle Post-Intelligencer that he and Esther Schmoe, 20, of Seattle, had applied for a marriage license in Spokane, with the approval of the bride's parents, Mr. and Mrs. Floyd Schmoe.

Caption information derived from captions written by Post-Intelligencer staff and attached to the back of the photograph.