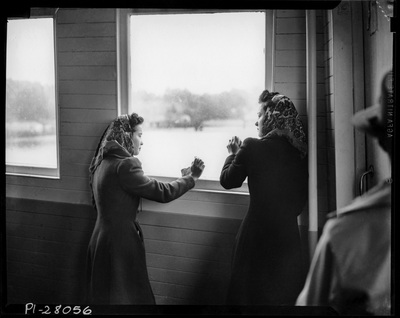 This image shows Ritsuko Terayama (left) and Sumiko Furuta (right) looking out the ferry window as the cross Puget Sound on their way to an incarceration camp. Civilian Exclusion Order No. 1 was issued at Bainbridge Island, ordering 227 residents of Japanese descent to leave with six days' notice. They departed by ferry on March 30, 1942. The island had a total of 276 Japanese American residents at the time; those who were away from the island at the time due to study, military service, or other business were not permitted to return. After their forced removal from Bainbridge Island, they were sent to Puyallup, then to Manzanar War Relocation Center in California.

Sumiko's brothers Arthur and Noboru served in the US Army during WWII, despite their families' incarceration. Arthur served in the 442nd Infantry Regiment, an all-Japanese American unit. The 442nd became the most decorated unit in US military history for its size.